In order to keep myself busy whilst locked down, I took on a project of restoring a rather dilapidated, though (in my opinion) charming, and pleasingly-proportioned keelboat. The boat was complete with both a mainsail and a jib and, despite being quite scruffy, actually was sailable. Despite this, the general condition of the boat was quite bad, and it was unlikely to deal well with strong gusts…

The boat is a Hanseatic 19.2, which appears to have been built in 1978. The cockpit had clearly been re-fitted at some time during this period; with a thick, planked deck, a center mainsheet (awkwardly) attached to the floor on a short wire cable, and a bilge pump handle located directly in the middle of the floor. From the looks of the boat, and some judicious Googling, it appears that the mainsheet may have originally been attached at the transom, though this practice appears to have fallen out of fashion on more modern boats.

Before any work started, I took a few photos to catalog the initial state of (dis)repair. 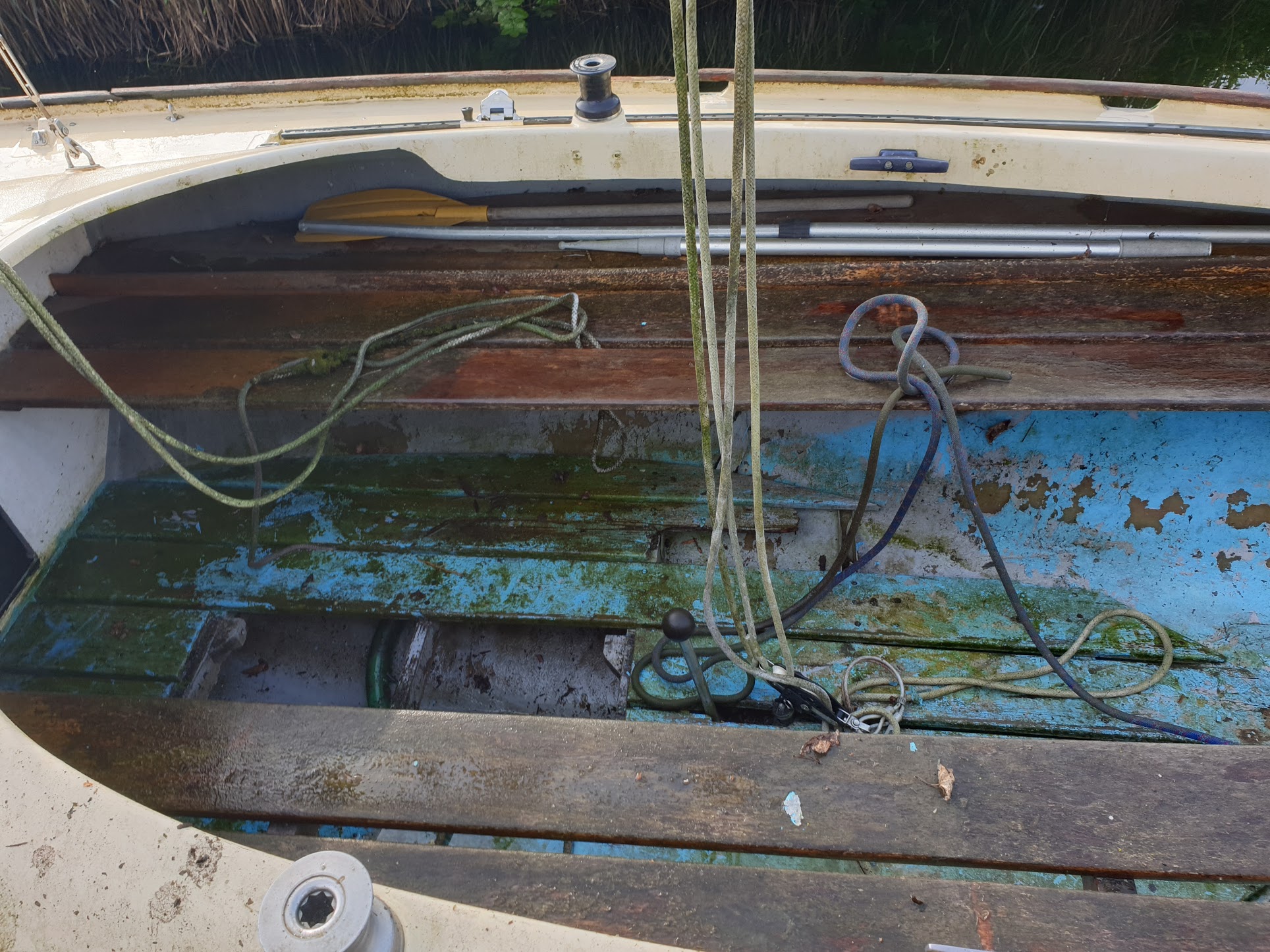 In the cockpit, the wooden decking was sodden and rotten through, with multiple planks broken. Just visible is the bilge pump handle, which was dangerously located in the center of the cockpit next to an improvised rig for the mainsheet. 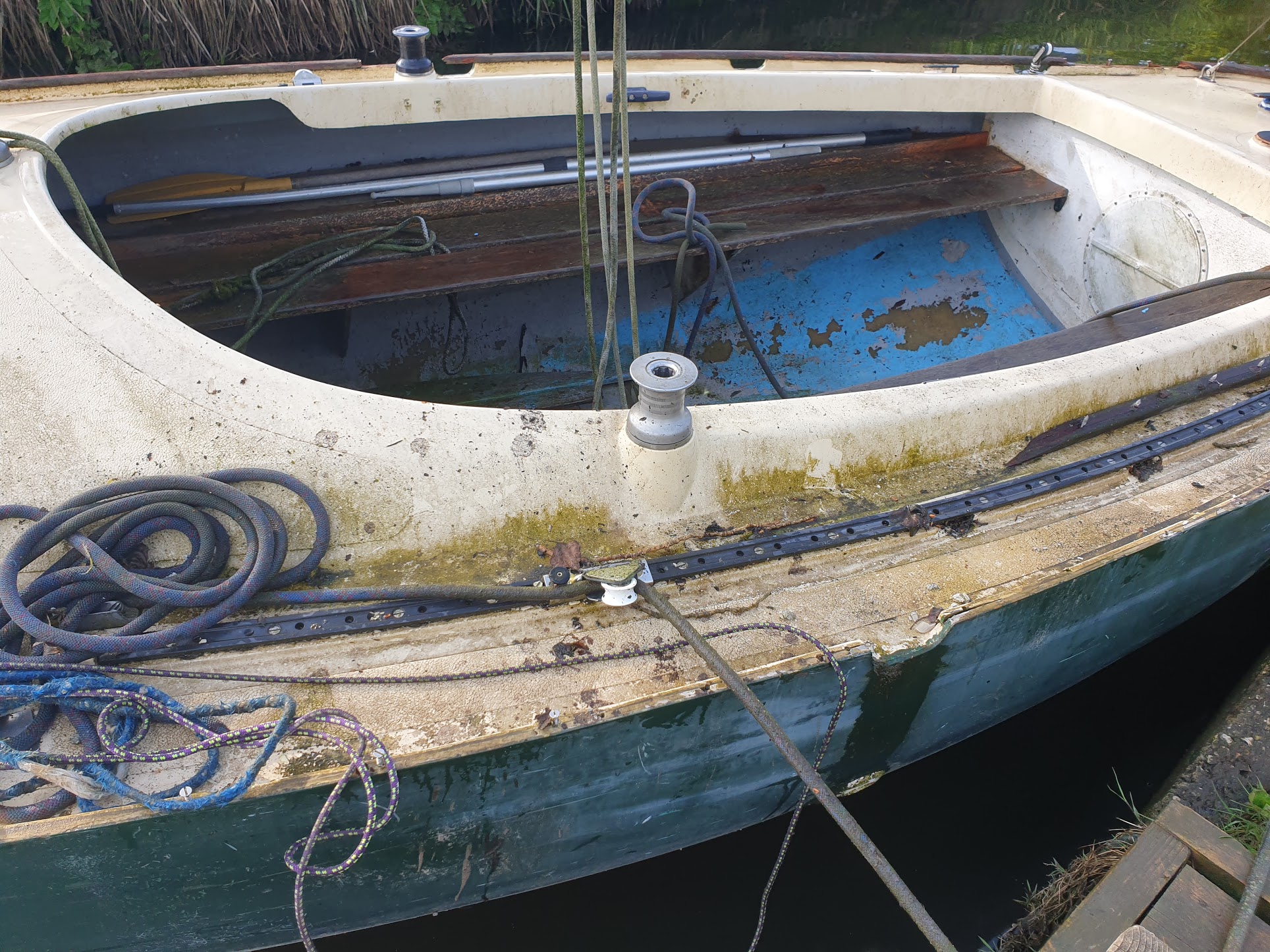 The deck was coated in mildew, and the wooden trim was broken and rotten. The hull was scraped and and dirty.

The first step was to pump out all of the water, and to run a jetwash across every reachable part of the boat’s exterior. Happily, the superstructure appeared to be in good shape, with most of the blemishing being cosmetic, rather than structural.

With some mechanical persuasion (read: a hammer and a wood saw), the decking was not difficult to tear out. Originally this may have been glassed into the hull, but due to rotting, it was no longer rigidly affixed, so a hard tug was sufficient to detach it. 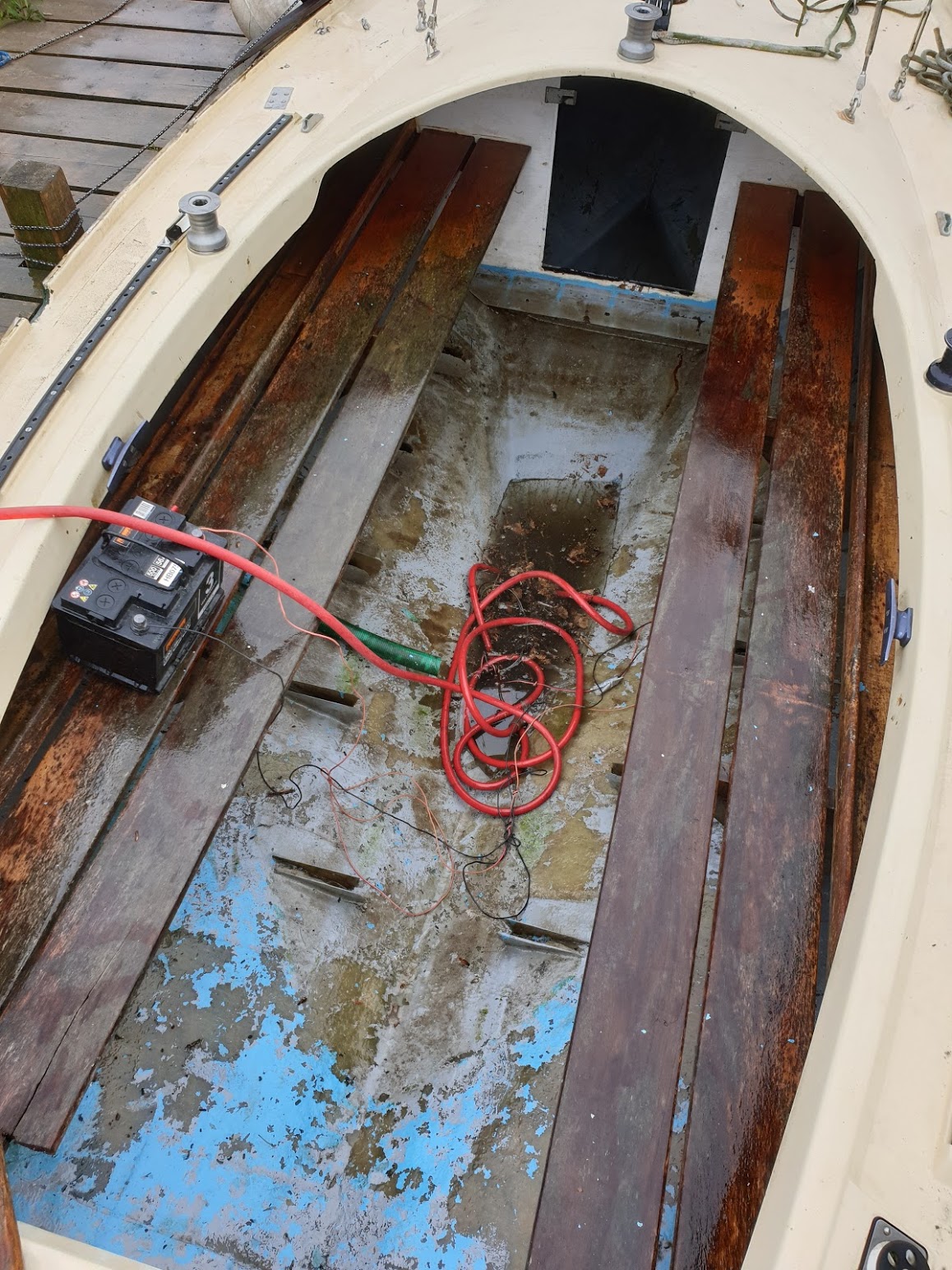 Due to the rotting, the wood was very heavy. Once it was removed (and the boat was bailed out) the water line raised by several inches, and the boat become much more buoyant in the water.

The next job to tackle was removing the old wooden trim. At one stage, this probably looked very nice, and it had been very nicely made with clean joins and caps. But with time it had become rotten and broken, and so I decided to remove it so that I could later replace it with new wood. 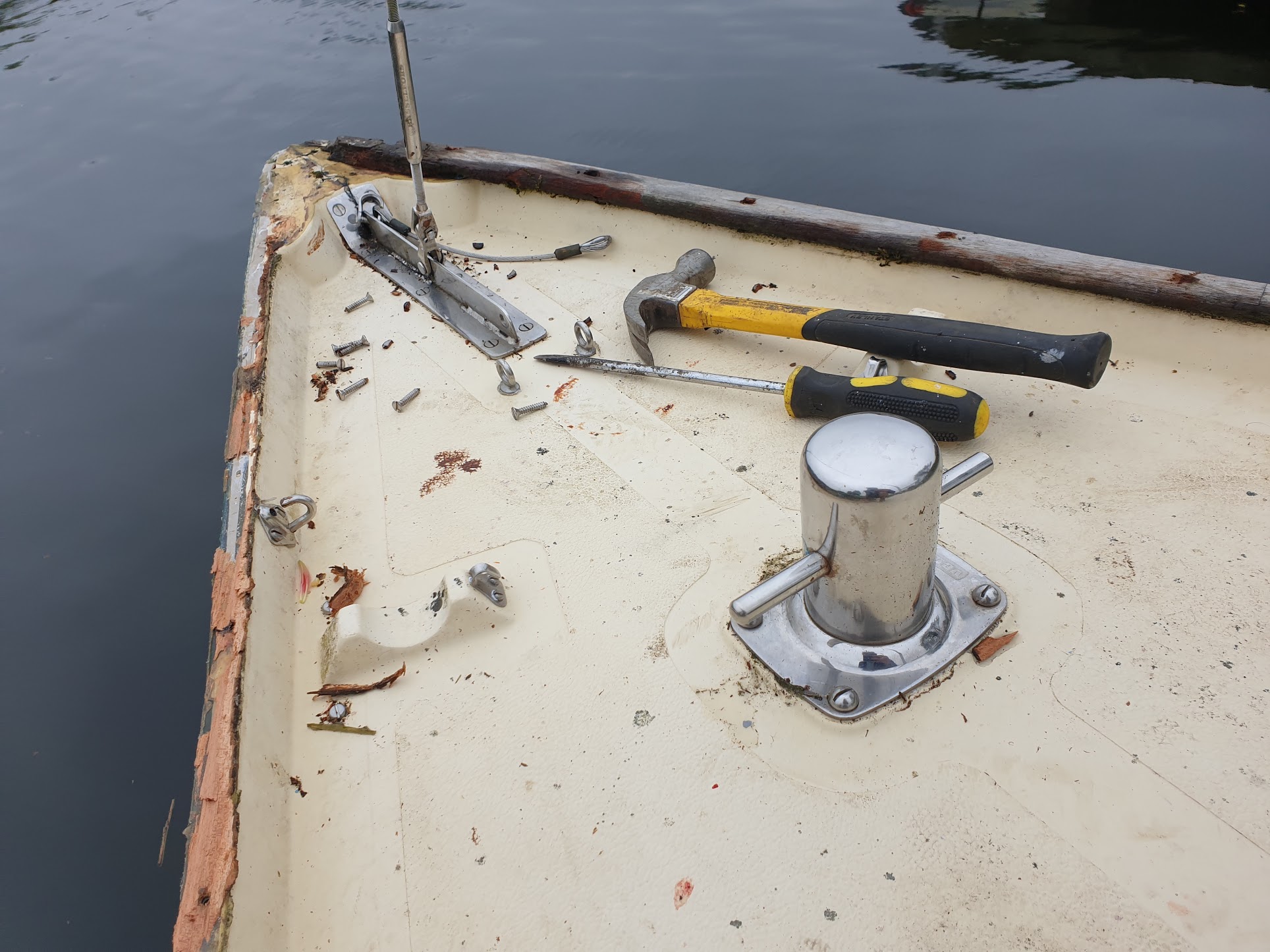 Since it had been attached with hundreds of long, tightly inset stainless steel screws, this job was long and painstaking, and resulted in a number of screwdriver-inflicted blisters… But the end result was much cleaner and left a clean slate to build on top of. 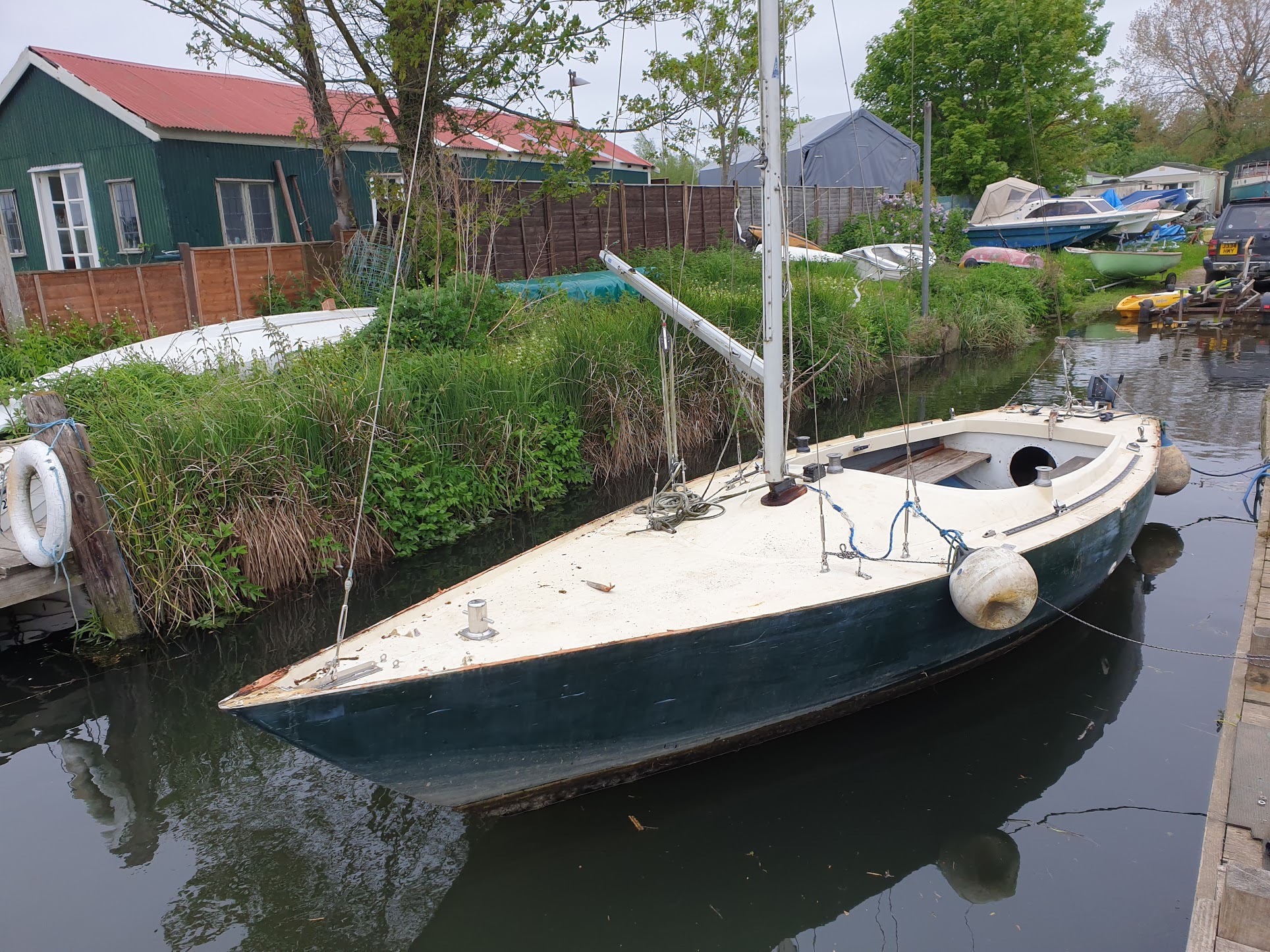 This image also clearly shows the change in the waterline, and the cleaned up deck! Already the boat looks to be in much better shape!